This week’s picture is based on one of my all time favourite films – Kill Bill Vol. 1. While Uma Thurman, as The Bride, wore a modern motorcycle leather tribute to Bruce Lee’s Game of Death jumpsuit, I’ve gone more for the look of Lee’s original.

I Reek of Geek 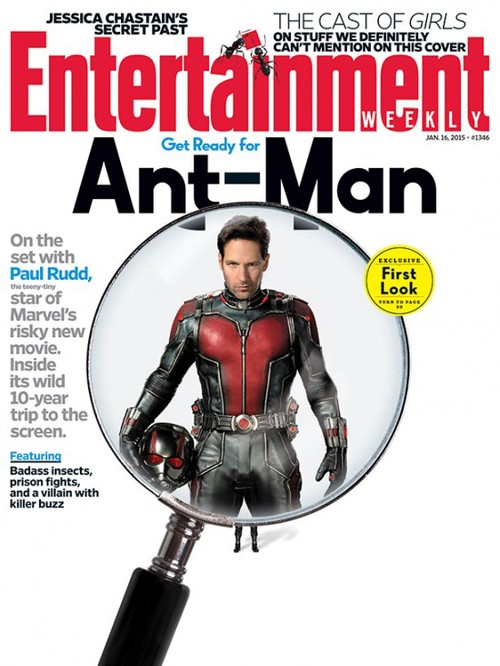 Magnified close-up of Paul Rudd in his Ant-Man costume.

So we have the first Ant-Man poster released a day or so after the teaser trailer hit (also going with the miniature themed design) and my feelings are about as mixed as the upcoming film.

It’s no secret that the film has had some difficulties, with Shaun of the Dead director Edgar Wright leaving the film and being replaced Peyton Reed due to “differences in their vision of the film”.

From what I gather, it was that Edgar Wright’s vision of Ant-Man didn’t fully align with the universe that Marvel are creating with their characters. Edgar has a very distinct style and this may have caused some friction between the two.

There’s no doubt Marvel are approaching this film with more of a comedic touch, Paul Rudd being cast as the lead role hints strongly at this, but the design of this…

Does Patrick Stewart finally have an Oscar coming for this role? That’s my first thought when I saw this trailer in facebook. Here’s the trailer for Patrick’s next film, “Match” which hits theaters January 14th. After seeing this trailer, I’m sold. I think I’m definitely gonna go see this one.

Patrick Stewart have been my favorite actor for years and this guy is bound for an Oscar at some point. He’s such a talented actor, I’ve been watching him in movies and TV shows for years. He spent years doing sci-fi and superhero films (Star Trek: TNG and X-Men obviously) and it’s awesome he’s finally doing something different.

Look like this movie “Match” will finally show his great acting chops. Patrick is awesome. I’m not sure if he’ll get nominated for this year’s Oscars ’cause it’ll be too late but definitely next years. Who knows, though? The Oscar nominations have…

This gave me EXACTLY what I wanted.  Denzel Washington stars as Robert McCall, a simple yet mysterious man who starts an all out war with the Russian mafia in order to free his young friend from their control.  From the moment the movie starts you can almost sense the clock ticking towards a moment when McCall let’s his violent past out to play.  Once it does you are wowed by the precise and awesome action scenes and suave that Mr. Denzel brings to the character.  I often get tense about how directors will be able to realistically portray an older actor in a badass action role.  It can get ugly if not done correctly.  This is not one of those times.  Denzel is perfect for the role and the role is perfect for him.  The only negative I had for the movie was that the plot can get a little…

Have you seen the Sam Raimi directed Spider-Man 3? If so, did you like it? Are you sure you liked it? Because its okay if you didn’t, you’re not alone. I thought that film (like typical third entries in franchises) tried living up to expectations set by those responsible for previous films successes, expectations that couldn’t be reached. The director of the film himself reflected on the ’07 blockbuster during a recent interview with Nerdist Podcast, and wasn’t afraid to admit what the film really was.

It’s a movie that just didn’t work very well. I tried to make it work, but I didn’t really believe in all the characters, so that couldn’t be hidden from people who loved Spider-Man. If the director doesn’t love something, it’s wrong of them to make it when so many other people love it. I think [raising the stakes after Spider-Man 2] was…