The databank on starwars.com has been with new descriptions for brand new characters and vehicles making their debut in the upcoming Star Wars spin-off Rogue One: A Star Wars Story. The film set just before the original classic A New Hope tells the story of the Rebel Alliance as the rebels steal the Death Star plans and win their first battle against the empire. Rather than just focus on the new updates from the databank, I’ve made this your one-stop shop for information regarding every character from Rogue One who currently has an entry in the Star Wars databank.

Putting behind a checkered past by lending her skills to a greater cause, Jyn Erso is impetuous, defiant, and eager to bring the battle to the Empire. Used to operating alone, she finds higher purpose by taking on a desperate mission for the Rebel Alliance.

This whimsical film is a myriad of mess and magic as the new Harry Potter spin off tale tries its best to capture the nostalgia of the original tales. Though it wows in conception and screenplay, i…

Source: Fantastic Beasts and Where to Find Them (2016)

This whimsical film is a myriad of mess and magic as the new Harry Potter spin off tale tries its best to capture the nostalgia of the original tales. Though it wows in conception and screenplay, i…

Source: Fantastic Beasts and Where to Find Them (2016)

For a simple animated kids film about a Polynesian princess (technically, she’s only the daughter of a chief, but you know what Disney’s marketing department will say — there is even a line in the movie about the criteria for princess-hood) who seeks her own destiny to help save her people, there are a lot of expectations around this movie. For starters, this movie follows in the tradition of mega-hit Frozen, taking a legend/folktale and giving it new, animated, musical life. The animation has a similar style (most notably with those giant eyes!), and the story is once again full of female empowerment and animal sidekicks (a little pig and a ridiculously stupid rooster, along with “the ocean” as a kind of ally or pet — bet no one’s ever tried that before). Along for the ride is a demi-god named Maui: a thick-chested, tattoo-covered, shape-changing trickster, voiced by Dwayne… 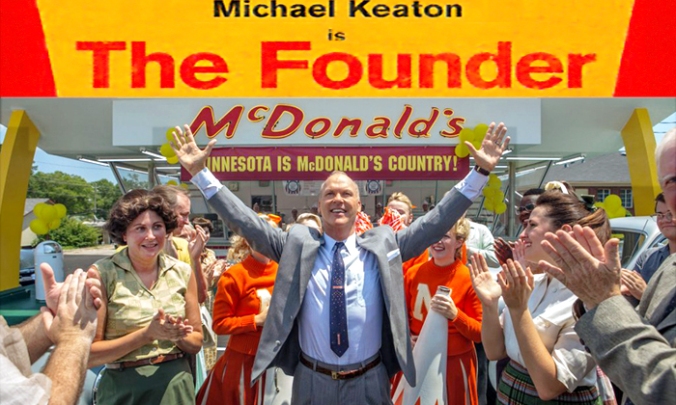 Biographical dramas tell stories about significant people in history but they are always much more than that. The person chosen for the bio-pic reflects something about the values of the era and the society from which they came. In this sense, The Founder (2016) goes well beyond the story of a global hamburger empire to the values that made McDonald’s possible and it does not paint a pretty picture. The mantra “persistence is everything” is heard at the beginning and the end of this film but when decoded it means persistent treachery, greed, and a code of ethics toxic enough to remove some gloss from the world’s most recognised golden arches.

The real founders are brothers Maurice (John Lynch) and Richard McDonald (Nick Offerman) who pioneered the idea of standardised burgers made quickly that led to the modern fast-food industry. Into their lives came Ray Kroc (Michael Keaton), a struggling…

NOW SHOWING at the Crandell Theater in Chatham: Fantastic Beasts and Where to Find Them

A spin-off prequel of the Harry Potter film series, the film was produced and written by J. K. Rowling (in her screenwriting debut), inspired by her book of the same name. The film stars Eddie Redmayne as Newt Scamander with Katherine Waterston, Dan Fogler, Alison Sudol, Ezra Miller, Samantha Morton, Jon Voight, Carmen Ejogo, Ron Perlman and Colin Farrell in supporting roles. It is the first instalment in the Fantastic Beasts franchise, and the ninth in J. K. Rowling’s Wizarding World.

Fantastic Beasts And Where To Find Them is a charming slice of whimsical magic, beautiful and engrossing from start to finish, and probably my favourite ‘blockbuster’ this year.

This surprises me, more than anyone, because I’m not really much of a Potter fan…never have been. I appreciate the movies, don’t get me wrong, and I totally understand why a whole generation fell for them, but I didn’t start watching the Potter series (for various reasons) until film six, which rather left me feeling that I was a bit too late to the party. Plus I always found the stories a little derivative of other fantasy fiction with a few too many MacGuffins for my liking.

Fantastic Beasts is, on the other hand, a different…well…’beast’ altogether. Whilst it certainly expands the Potter universe, it is also very much its own film. There are really obvious similarities to be made with The…